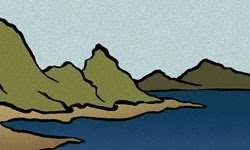 Ryan Tang writes that Water Cycle “blends science education with a sense of melancholy to form a commentary on the cyclical nature of life and, by extension, the renewal of emotional energy in time.” In its brevity, its simplicity and its momentarily incongruous assignation of a human quality to what we at first perceive to be a mere, inanimate cloud, his film resembles a zen koan constructed to remind us there’s wisdom to be found in nature: if we’re to maintain the balance and harmony we witness there, emotions are better released than held in. I particularly appreciate Tang’s simple but effective choice to subtly prepare us for the shift from scientific demonstration to a more human subject by making his cloud appear to breathe. The song on the soundtrack is Abandon, by Calgary musician Bearcraft.

Ryan Tang was born and raised in Calgary, Alberta where he currently attends the Alberta College of Art and Design. While he happily works with a variety of media, Ryan has carried on a torrid love affair with animation since seeing his first cartoon. Where he is not busy completing various projects, he can be found watching reruns of Iron Chef and Three’s Company.
Newer Post Older Post Home