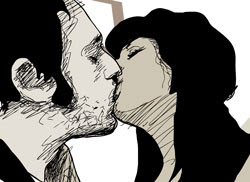 An illicit encounter is brought to an abrupt end when an unexpected visitor knocks on the door. Adolfo Ruiz originally shot the brief action of this piece using a hand held mini-DV camera and employing long takes to create a more natural feel. He then took fifteen frames of each second of footage, transferred them to Flash and traced the film’s key images using a Wacom tablet. Ruiz and three other artists took approximately 500 hours to enhance the tracings over a three-month period, adding expressive line-work to each frame with a view to reinforcing the story’s dramatic content. The result is a hybrid of digital filmmaking and drawing that juxtaposes the recklessness of adult behaviour with the wisdom of children.

Adolfo Ruiz studied art and design in Spain, England and Canada. He maintains a multidisciplinary practice as an independent filmmaker and graphic designer. As a member of FAVA his film work has shifted between rotoscoped animations and 16 mm live-action films, of which he has created six since 2003. In terms of content he is often attracted to fictional narratives involving alienation and reconciliation. His work has been screened at festivals, art events and on CBC television. Adolfo has also worked with various organizations in Alberta including Grant MacEwan College, Mile Zero Dance and Quickdraw Animation.
Newer Post Older Post Home