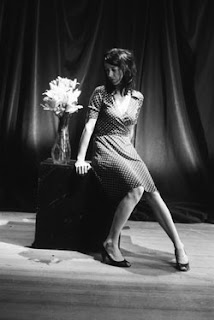 While Dave Morgan describes his film as “an ethereal story of the five minutes before the shooting of a music video” it’s also a funhouse of mirrors because of course the five minutes before the shooting of the video is the video. If Wendy McNeill were actually to perform Cigarettes and You in whatever music video was ostensibly planned for the song – well, that would be giving the ex-lover who inspired it undue acknowledgement. Depicting McNeill walking from stage to stage through a studio set only to find the same grim reminder of love lost at every turn, Morgan mines the same grin-and-bear-it vein of humour Hoagy Carmichael exploited with I Get Along Without You Very Well. The difference here is that unlike Carmichael, McNeill appears to have moved way past the denial stage.

Dave Morgan was the Production Coordinator at the Film and Video Arts Society Alberta (FAVA) for 15 years, holding down the same office in the old Ortona Armoury his Navy Captain father used years before. Prairie Torch Song is the third part of an unintended trilogy with singer Wendy McNeill that started with Black Angus and moved on to Such a Common Bird. Dave is currently working on two Second World War documentaries, one of which is about his father. In all his work, Dave takes care to surround himself with good people and competent professionals.
Newer Post Older Post Home