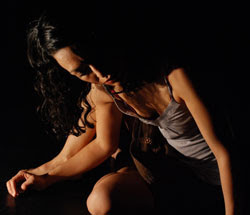 This experimental dance video features a solo performance by dancer / choreographer Tania Alvarado twitching and writhing sensually to the whims of a hanging light that rises from the floor, hovers for a period, then returns whence it came. While on the one hand the light energizes her, the exertion it inspires threatens to exhaust the woman completely. Balance is a delicate thing that must be learned. Luz is one of four films originally commissioned as an experiment in creative collaboration between dancers and filmmakers by the Film and Video Arts Society Alberta (FAVA) and Mile Zero Dance (MZD). Rather than commit an existing piece of choreography to film or even create a dance work exclusively for video, the project’s goal was to create a piece that represented true collaboration between artists: a work that could not possibly exist on its own in either discipline.

Eva Colmers is an independent filmmaker who has written and directed a dozen or so award-winning short films and documentaries including Luz (2008), End of the Rope (2007), Hand Sum (2006), Blink! (2005) and the NFB documentary The Enemy Within (2004). Her films can be seen on television and at film festivals around the globe. She has also melded her work with dance, music and theatre, most recently in ki 木 with Mile Zero Dance, Glad of the World with the St. Crispin’s Chamber Ensemble, and The Headless Cowboy for Broken Spoke Theatre. Eva is very active in Edmonton’s film and theatre community. She enjoys teaching filmmaking and directing, and loves photography, print making and travelling. She is presently developing a cut-out animation short film and a documentary about elder care for the National Film Board.
Newer Post Older Post Home