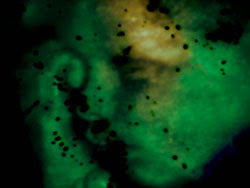 Transient Bodies is an abstract representation of the Internet as a fog of linguistic confusion. The work began as a piece of hand-made animation, which McCarrel scored and dyed directly onto 16mm film stock. The result was transferred to a digital format that Charlton manipulated and distorted to achieve a feeling of chaos meant to evoke the confusing virtual plane of existence we know as the world wide web. Like the Internet, the visceral imagery of Transient Bodies refuses to coalesce into an ordered whole, yet it maintains a mesmerizing hold on the viewer. This version of Transient Bodies is actually a seven-minute edit of a fifteen-minute piece for video jam. That longer version is performed live, with Charlton and McCarrel layering yet more imagery over the existing projection while musician Owen Kalau provides a soundscape. Kalau’s contribution is still a feature of this segment.

Ben Charlton is an undead filmmaker living in Calgary, Alberta. During the production of his last film, a tragic betrayal became apparent when his preserved rats-turned-puppets revolted, infecting him with the Black Plague. Not content to let such foul treachery spell an end to his vision, he vowed to return from the dead to further spread his message of death and the afterlife (in fact, some would say that his new experience with death has only added further conviction to his beliefs). However, being a zombie in Calgary is hard, so when times are tough, Ben turns to the written word to further his mission.

Jessica McCarrel is a painter, art administrator, and deathrocker. She currently paints images of cadavers and works at The New Gallery.
Newer Post Older Post Home