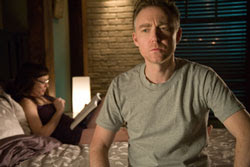 Two thirds of the way through this compactly layered demonstration of the degrees of complexity and subtlety achievable in post-modern bedroom banter, a character briefly references a recurring dream in which a monkey keeps clapping two giant cymbals against his head. On one level, it’s a playful reminder that we’re not just watching two individuals negotiate a hump on the path of what appears to be an otherwise inevitable relationship. He’s an Anglo with a point of view about feminism. She’s French Canadian with a rather intimidating grasp of cultural studies. Yet somehow, they manage to make it work. Hmmm. On another level, all those navel references point to a frisky essay on the notion that everything is text. In Translation is Corey Lee’s third and final adaptation of a short story from John Gould’s Kilter: 55 Fictions.

Corey Lee has written, directed and produced the feature film Defining Edward as well as music videos and several short films, most recently, the award-winning Kilter trilogy, adapted from John Gould’s Giller Prize short-listed collection Kilter: 55 Fictions. Corey’s films have screened at prominent festivals and won numerous awards. The majority of them are archived in the National Collection at Library and Archives Canada. He is a regular instructor of screenwriting, directing and the filmmaking process at the Calgary Society of Independent Filmmakers. He also has a wide range of projects in development. Far too many for his own good.
Newer Post Older Post Home