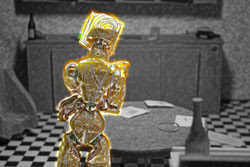 Visages is a study in contrast between the light and darker sides of identity. Director Lyle Pisio calls it a “cosmic battle” over a “choice between good and evil, reality and comfort, escaping and existing, addiction and coping” that manifests in the choices we make about identity. However you see it, the metaphysical journey of Ely, Pisio’s puppet hero (or anti-hero), is an adventure of self-discovery that has surprises in store for its protagonist and the viewer alike. Pisio’s attention to detail in what must have been painstaking stop-motion work successfully endows a wooden puppet with recognizably human clumsiness and tentativeness of movement that passes for symptoms of impairment and, at the same time, communicates the fear and apprehension of challenges beyond the normal ken.

Lyle Pisio started out in the early 1980’s as an alto sax player and founding member of no less than five Calgary-based bands. But in mid 2000 he bought his first digital camera and started making very short stop-motion animation films using objects found on the highway on long bicycle trips. With a computer program that he wrote himself – a technique he would return to again and again - he released his first film, Corpse, in 2002. TV and The Unholy followed in 2004 and 2006 saw Another Lost Soul, a timelapse film shot with a still camera attached to a reflective ball. By early 2007 he had quit his job as an instrument repair technician to pursue his dream of being an artist. He now lives with his wife and two cats in Calgary, where he has been all his life (mostly in the basement).
Newer Post Older Post Home