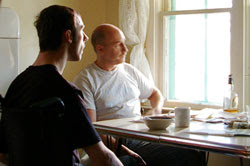 Hans Olson’s Baby Boots is a beautiful and bucolic piece about how innocuous events can often have profound impacts. David Bilodeau, who plays the film’s protagonist, has cerebral palsy, but Olson’s intention wasn’t to make a movie about disability, or to be overly careful portraying it. He knew Bilodeau previously and cast him for his generous character and quick, understated humour. What is it exactly about the arrival of a stranger on their farm that sparks change in a lonely father and son coping with the recent departure of the mother in their family? Olson leaves us with a few symbolic clues, but perhaps he’s merely reminding us that these turning points occur naturally as a matter of course; always and eventually, there comes a point when we’re ready to move on.

Hans Olson is originally from Armena, Alberta. He went to Augustana University College in Camrose and, after an internship in Guatemala, decided to pursue filmmaking. His first short film, Bronwen’s Ark, was made while taking FAVA’s Basics of 16mm Filmmaking workshop. After completing Langara College’s Film Arts program in 2007, Hans was excited to direct Baby Boots. While his narrative short films tend to take place against a rural Alberta backdrop, his first documentary, Where Credit Is Due, was filmed in Guatemala.
Newer Post Older Post Home