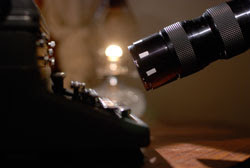 Portingale’s black and white Photosynthesis was his first stop-motion piece about the nocturnal mischief makings of a capricious camera that comes to life while its owner is away. This sequel features the same snap happy hero on a similar exploit, only this time in full colour and supported by a swinging score. Midnight Matinee can actually be interpreted as a reference to Portingale’s own journey through the creation of his earlier film. Like Photosynthesis, the movie-within-a-movie fashioned by his camera for a midnight screening is black and white and uses everyday household objects (in this case, bath products) to tell a story. It might well be added that, like Photosynthesis, it also wins the admiration and accolades of peers. But Portingale moves everything up a notch or three in terms of vision, ambition, technique and fun with Midnight Matinee, creating an even richer sequel that gives a whole new meaning to the expression “flash of inspiration”.

J. Scott Portingale is an Edmonton-based filmmaker who is an excellent example of how self-initiative and creativity can sometimes belie the need for formal artistic training. His award winning films blend traditional and modern visual mediums and combine animation with live-action. A distinguishing feature of his work is a spirit of play and whimsical exploration from which his creativity springs.
Newer Post Older Post Home