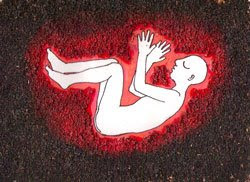 The Garden of Eden myth is re-visioned in this animated piece that begins from beauty, turns macabre and restores itself to beauty again, just like the original Divine Comedy. In place of Adam and Eve, however, animator Kimberley Anderson presents a single, genderless human as the primary ancestor, and at the centre of her garden, a wise and resilient Tree of Knowledge must contend with this first human’s dangerous ingenuity rather than its curiosity. As in Genesis, the revelation of nakedness is a consequence of consuming the Tree’s forbidden fruit, but for Anderson this discovery has nothing to do with all that sex stuff that so worries Catholics. Rather, it’s the vulnerability of mortality that’s realized and played out in a gruesome sequence in which the human dismembers and disembowels itself as if undressing. In exchange for death, however, the Tree bestows a deeper understanding of humanity’s place in the greater cycle of life.

Kimberley Anderson was born in Regina, Canada and moved to Calgary as a child. She attended the Alberta College of Art and Design, and transferred to Concordia University in Montreal, Quebec where she received her Bachelor in Fine Arts with Distinction in Film Animation. She has completed two short animated films, 2 and The Fall, which have screened at festivals around the world and won several awards. She is currently writing and painting.
Newer Post Older Post Home